I did an update on a plug-in and I turned off my printer by mistake (I know... My bad!!) so now I have a plug-in that is not working anymore but still show in the plug-in list. If I try to uninstall it, it will cause an error and say done. Reboot and it’s still there!

Besides uninstalling, I tried installing back from plug-in manager but it will not show in the list since it’s already installed. I tried reinstalling via ssh but it won’t work.

Yopu may try this:

I installed a broken plugin, how do I uninstall it again? FAQ

If you have installed a plugin which broke your installation so that the server doesn't come up anymore, you still can uninstall the offending plugin via the command line with pip: pip uninstall <plugin> Heads-up OctoPi users!!! For you it is ~/oprint/bin/pip uninstall <plugin>. Note that <plugin> will usually be something like OctoPrint-<PluginName>, so for example if you wanted to uninstall the Autoselect plugin, you'd need to supply OctoPrint-Autoselect as the name to uninstall. If that do…

And here is the photo of the uninstall process in Octoprint: 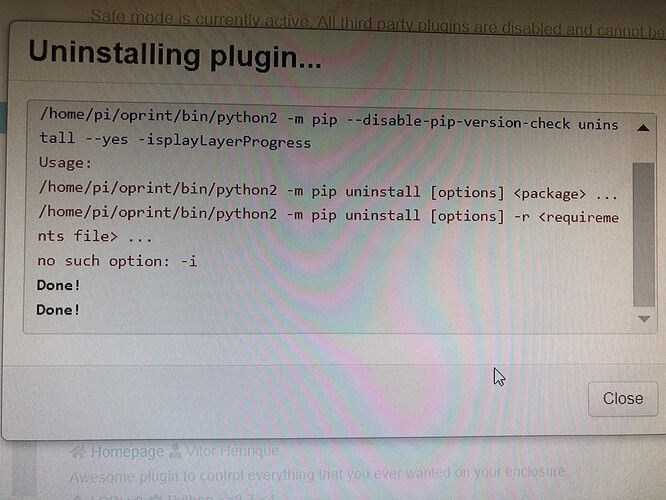 Also tried by fixing the code in the above screenshot and this is the result: It found the installation but did not find it lol 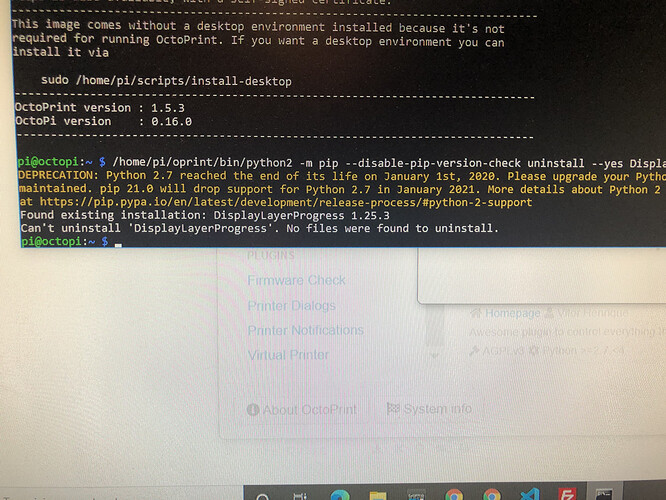 I have no idea right now why this plugin seems to think its name is -iplayLayerProgress, which turns it pretty much uninstallable because pip thinks its name is a command line switch, but I have something to say about your first screenshot.

Linux is different than Windows. Changing into a directory and then executing commands there will not automatically take the commands from that directory into account first. So even though you executed your pip install command in ~/oprint/bin there, that didn't mean it executed ~/oprint/bin/pip for you but rather whatever pip was first found on the PATH (probably the global one, which would explain the error you got).

Thanks for the tip but no, still show as not installed! With the "OctoPrint-" part removed, it seems to find the plugin but not able to uninstall it.

Could it be possible that the plugin is uninstalled but there is still an entry in the OctoPrint Config Files or Db? If yes, how can I edit that?

What do you get when you run the command ~/oprint/bin/pip freeze?

Can you please paste the output of

(the -- there is intentional)

Also, you could try

but I don't know if pip will accept that. It's worth a try though.

Thanks so much for helping me! Here is the logs with your commands: (First one just completed without errors o results)

I ran your command with the other DisplayLayerProgress and found that it was installed in the /oprint/lib/python2.7/site-packages folder. So I went there and deleted everything related to the two installation (using rm -rf) and rebooted. it does not show up anymore in Octoprint (GREAT). I have reinstalled the plugin and everything seems to work now!!!! Thanks again so much for your help!

Happy to hear! I asked for the grep because I wanted to see which kind of rm -rf commands to give you to clean this up manually, great you already took care of that ^^