Creating an all in one terminal

I'm fairly new to 3D printing in general, its always something thats fascinated me but been financially out of reach. I recently got an ender 5 and an old raspberry 3 and im attempting to setup my system with the cura engine legacy plugin for slicing. However, while setting it up using the github instructions below the legacy plugin download, i encountered a problem in that the gc-4.7 g++-4.7 cannot be found and i cant get cuura to work right without it. I know its supposed to be really easy to setup but im struggling to find up to date material that can guide me through everything. Any help is greatly appreciated but i would ideally ask that someone send me a step by step on how to install the plugin properly on just a blank version of octopi. i alreadu have a printer profile ready to import. Thanks very much in advance!

I can't really help you with the legacy plugin, but I would advise you not to use it.

Slicers matured a lot over the years and the old cura engine is really outdated.

If you can slice it on your PC - but If you have to slice on a Pi, you can still do that.
The available Cura version isn't quite up to date, but not that old.

Slic3r and Prusa-Slic3r can be installed via apt.

I just tested Cura on a stock Pi 3+ running 64bit Raspberry Pi OS and it took less than a minute to slice a benchy at 0.12mm layer height.

I don't know how well larger models slice, but feel free to test it

You should probably increase the swap to 2GB
https://pimylifeup.com/raspberry-pi-swap-file/

for certain reasons my employer has specifically asked for the octopi os on the raspberry, i am however fine with using a different slicer. could you recommend a video for setting up prussa properly?

OctoPi is based on Raspberry Pi OS.
I didn't test it on the 32 bit version though.

could you recommend a video for setting up prussa properly?

No sorry, I never used it. I'm a Cura guy

Maybe someone else got a good video recommendation for you

do you know how i can seperately download or add the gc-4.7 and g++-4.7 files to the newer version of octopi? And also what do those files actually do?

They're gnu c and c++ compilers.

I guess 4.7 was part of Stretch or Jessie at some point

Just tsted it on an OctoPi 1.0 nightly build with

and it seems to be working

So just try to build it

To install a slicer on OctoPi will require that the desktop be installed first. There is a script for that and instructions printed on the terminal when you login via SSH.

Following the advice of @PrintedWeezl, I was able to sudo apt install slic3r and run it successfully. I could not find Prusa-Slic3r and the Ultimaker Cura via Snap failed because it wants a 64-bit environment and the stable OctoPi release is 32-bit.

There is a beta release of OctoPi that I believe comes in both 32-bit and 64-bit flavors so you could try that. You say you have an old raspberry 3 which is either a 3B or a 3B+. I can't remember if both can run the 64-bit version but I'm pretty sure the 3B+ can.

did you have to do anything special when installing slic3r? i can do the desktop aspect easily but to be honest that middle section you wrote went way over my head. anytime i look at guides to download slic3r it requires over 30 minutes of setup. as i said i am not a person that is coding inclined. are you essentially saying that by installing a desktop i will gain access to the compilers i need? because as i understand it they are all thats stopping me

Imo the easiest and fastest way to get started is to install Cura on your pc, select the Ender 5 preset, install the OctoPrint plugin and connect it to Octoprint.
Then just slice, press on Print with Octoprint, open the Octoprint webui, press print, done.

I could not find Prusa-Slic3r

Ultimaker Cura via Snap failed because it wants a 64-bit environment and the stable OctoPi release is 32-bit.

Yeah I suspected that might be the case so I tested it on 64bit.

I can't remember if both can run the 64-bit version but I'm pretty sure the 3B+ can.

i understand that is the easiest thing to do but its not what my employer has asked for. For the purpose of pursuing my own ambition i would like to present him with exactly what he asked for despite the difficulty presented by this hurdle. I believe if i download an older version of octopi that the file needed may still be in the repository, any ideas how i can access previous versions that i can image using the pi imager? 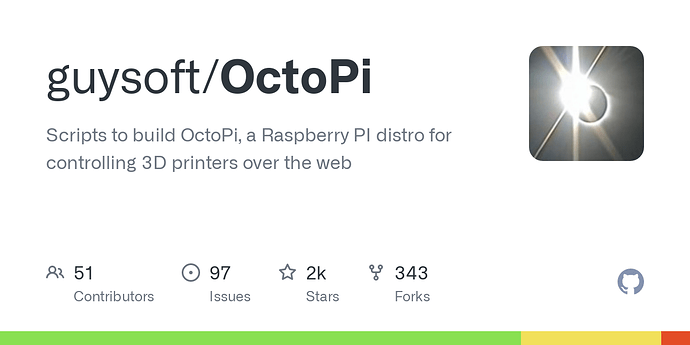 I would advice you to use the latest possible image. Best case would be OctoPi 0.17.0, which is based on Debian Buster and still got 2 years of extended support.

With those images you won't be able to update Octoprint to the latest version, because it requires Python 3 since 1.8.0.
If you want to upgrade the OctoPi 0.17.0 image to Python 3 follow this guide

You can run a simple script which should take care of everything for you.

did you have to do anything special when installing slic3r?

I don't consider any of the above "special". There is no "compiling" involved as I'm just using the pre-build packages from the repository.

My recommendation is to use OctoPi 0.18.0 which will come with OctoPrint 1.8.2. Install the desktop, install slic3r-prusa, and install the OctoPrint-Slic3r plugin. If this doesn't meet your employer's request, then you will need to tell us more details about what he has asked for.

I also would recommend that you explain to your employer that slicing on an "old raspberry 3" is not the best solution. Do your slicing on a desktop (or more than one) and then upload the .gcode files through the OctoPrint web interface. Depending on the slicer, you may be able to configure it to interface with OctoPrint directly.

do i have to set it so the desktop always opens when the pi starts or should i have it set to no. in regards to my employers request he simply wants students and teachers to be able to log in to the octopi web interface, transfer stl files and have them sliced and printed all in one neat setup

im attempting to compile the library following the instructions given in the link you provided. they present a large quantity of code which confuses me greatly.

are the paragraphs chunks of code i just copy and paste or am i meant to do this one line at a time? This is very confusing for someone whose not well versed on coding as i cannot see any clear indication of enter breaks

As several people have now told you, you should be using modern versions. If your employer wants ancient stuff, you should advice them to go with what's supported instead of what's completely unsupported for years now - they can't want to build up their stack on ancient unsupported software.

And you should especially do this because it seems like frankly you are completely out of your element with trying to get said ancient and unsupported stuff to work. We are a helpful bunch here, but this here starts to look like you are asking us to do your job for you and that frankly is not what an open source project and/or its support forums are about.

First of all I say my employer but really he’s more a benefactor that can get me a potential job. I’ve exhausted my means of conventional resources so I am seeking to follow the advice previously posted to install the recommended add ons. Im frankly confused at your comment. This is an open source forum for getting assistance when you hit a wall when using this specific program which is exactly what I’m doing and I’m very close to achieving my goal thanks to help from b-Morgan and weazle which I am more than grateful for as I never would’ve achieved this alone. I have minimum hurdles left to jump the big one being I am unsure how to break up the aforementioned code to correctly set up the TBB library on rasbarian 8.3 necessary for building the current version of slic3r. The github installation guides are all out of date and contain coding for files that either clash or no longer exist within the repository which is incredibly confusing and frustrating for someone new to the program hence why I have reached out for assistance which I have gotten.
As I’ve previously stated I’m aware that for high quality and detailed printing it is better to run the modern cura app on windows or whatever pc os you run and install the octopi on that however the goal of this project is to create an all in one terminal. Not a terminal that can only read gcode, one that does everything so that a student or an untrained teacher/substitute can use an easy gui to complete their task

Where do these .stl files come from?

I would propose an alternate solution to your employer...

Instead of sending .stl files to OctoPrint, use slicers that have a direct to OctoPrint option. There are many to choose from (PrusaSlicer, Ultimaker Cura) including web based slicers like Kiri:Moto.

I believe this can satisfy your employer's desire in a more supportable way.

Sometimes it can be hard to create the desired solution, and goals have to be changed down the road.

Gina's point was that if you are being paid to do this work, and you are then just offloading part of that on to the community (for free), that is not correct.

The reason that everything is outdated is because not many people want to do things this way anymore - there's a reason it's called 'Cura Legacy'. It shouldn't be used for a new setup. Regardless of what your employer would like, I would say you should recommend to them an alternative way to solve the problem, so that you don't have to run ancient software for them.

I also don't see where building the slicer manually comes in - above were posted several ways to get the slicers using sudo apt install. Have you tried that?

It’s says quite clearly in the install guide if you are running a younger version than 10 you’ll have to build the library yourself. Seeing as octopi uses raspberry 8.3 that’s the set of instructions I followed. Was I not supposed to do that?

And as I explained 3 TIMES NOW. This project is for my own ambition. I AM GETTING PAID NOTHING. I’m trying to get a job in an environment that will allow me to grow and nurture my inventive side and this is my way in. I’ve been given that same piece of advice 7 times in this thread. If you don’t have a direct comment of assistance towards the published project kindly remove yourself from the chat. I’ve been working on this for months and have only just managed to get assistance with this.